A laborshed is the area from which an employment center draws its community workers.  Residents living in the labor shed commuting to work from Charles City to other towns is 15.2 percent or 615 people.  Charles City Area Development Corporation Executive Director Tim Fox:

Less than one tenth of commuters are likely to change employment. Fox says one way to help stimulate job growth in the area is better housing.

Fox says this study is a way for current employers to adjust wages for more workers. 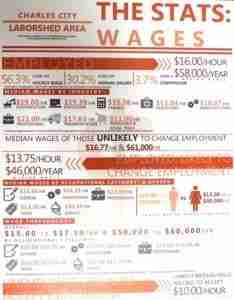 Fake Currency Cashing In At Banks In Surrounding Areas