Charles City, Iowa –  There are new Comets who’ve been inducted into the Charles City Hall of Fame.  Tye and Cathy Darland, Jerry Newton, Marilee Monroe, Nathan Dishman, and Al Hastings. Each year the Excellence in Education committee accepts nominations for the distinguished award.  Below are their bios.

Tye and Cathy Darland both graduated from Charles City Community High School in 1982 and continued their educations at the University of Iowa. In 1986, Cathy obtained her Bachelor’s Degree in Finance and sought employment to support Tye while he studied at the University of Iowa Law School. Tye graduated law school with high distinction in 1989, and together, the couple made Kansas City their home.

Tye began his career with a Kansas City law firm. After four years, Koch Industries in Wichita, Kansas recruited Tye, where he served for twelve and a half years as the main mergers and acquisitions attorney, eventually becoming the General Counsel for Koch Industries. In 2005, after Koch’s purchase of Georgia-Pacific, the Darlands relocated to Atlanta where Tye currently serves as the General Counsel of Georgia-Pacific and leads a team  of over 55 attorneys. Tye was recently recognized as a Legend of the Law at the Burton Awards at the Library of Congress in Washington, DC.

Tye and Cathy are appreciative of the incredible education they received at the Charles City Community School District. While they did not have the best equipment nor a broad curriculum, they both recall dedicated and experienced teachers and administrators that gave them the confidence and Marilee married Ernest “Bud” Monroe in 1953. After 50 years of marriage, Bud passed away in 2003. Together, they have four children, Mitchell (Anne), Julie (Bill) Fee, Mark, and Malinda (Wes) Quinn, seven grandchildren, 5 great-grandchildren, and one great-great-grandchild.

Jerry Newton attended Rudd School District until the completion of his junior year, when he moved and graduated from Greene High School in 1957.  After graduation, he spent the next six months on active duty with the Army Reserves. In 1961, he obtained his Bachelor’s Degree in physical education from the University of Northern Iowa and returned to active duty until he was discharged in 1962. He was hired by Fredericksburg Community School District and taught biology, driver’s education, and physical education, while also coaching baseball and girls’ basketball. He also served as the Athletic Director for the last ten years of his Fredericksburg tenure. In 1973, he earned his M.A. in Health & Physical Education and was hired as a Charles City Comet, teaching middle school life science and earth science courses until health education was added to the curriculum. He remained in this position until his retirement in 1999.

As a member of the Charles City community, Jerry shares his passion for athletics by officiating several cross-country and track events every year. In addition, he is a member of the Comet Booster Club, Elks Lodge, Pheasants Forever, Ducks Unlimited, and the Izaak Walton League. He also enjoys watching a variety of Comet athletics and activities.

Jerry and his wife, Joyce, have been married for 55 years. Together, they have two children, Jeff (Angie), Jolyn (Mike) Dailey, and four grandchildren. 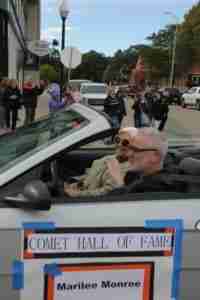 Marilee Monroe graduated from Colwell High School in 1951. As a student, she developed a deep admiration for teachers, leading her to serve as an instructional assistant for five years at the Charles City Community Junior High School. In this role, she worked with the social studies and English departments and supervised students during lunch and study hall.


In 1974, Marilee was elected as the Floyd County Recorder. As recorder, she was a devoted servant to her constituents and served as President of Iowa State Records’ Association from 1988 to 1990.  In 1996, she was elected president of Iowa State Association of Counties. Two years later, Marilee retired from the Floyd County’s Recorder’s Office after twenty-four years of service.

Marilee’s deep commitment to Charles City and the city’s youth is illustrated by decades of collaboration with teachers to bring community and history into the classroom. Developing activities such as Iowa Caucus simulations, third grade bus tours of Charles City, and history lessons of Floyd County, Marilee is eager to share her love of her community. She counts herself fortunate to witness firsthand the quality of education Charles City students receive. In addition, she describes her work with students as one of her most rewarding experiences and enjoys reminiscing and reading countless thank you notes received from students throughout the years.

As the 1990 Charles City Chamber of Commerce Woman of the Year and  the 2016-2017 Lincoln Elementary Volunteer of the Year, Marilee is no stranger to Charles City’s youth and adults. She is passionate about serving her community, which is noted in her commitments to numerous organizations throughout the years. Marilee has been involved with the Salvation Army for forty years and provides leadership for the Red Kettle Campaign. She is also involved with Iowa Big North and a drug recovery program called So Far, Sober for a Reason. In addition, Marilee volunteers at the Charles Theater, the Rockford Fossil Park, and the Floyd County Museum. 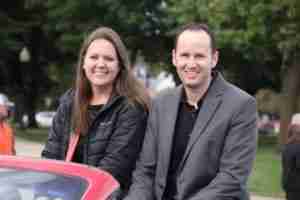 Nathan credits his passion and love for music to the opportunities available to him as a Charles City Comet, including countless district, state, and invitational competitions for marching band, jazz band, and concert band. Furthermore, he acknowledges the support from the teachers and faculty throughout his education that pushed him to achieve more.

Nathan’s performance highlights include being selected two times as was one of six international tenor trombone participants selected by Joseph Alessi, principal trombone of the New York Philharmonic, to take part in the prestigious Alessi Seminar in Albuquerque, New Mexico. He has also played with the Charlottesville Symphony, Des Moines Symphony, West VA Symphony, Cave Run Symphony and the DiMartino-Osland Big Band. Internationally, Nathan has also performed in Switzerland, Paris and Amsterdam and was recently a soloist in Brazil with the Amazonas Philharmonic in Manaus and for the Brazilian Trombone Festival in Joao Pessoa.

Nathan recently returned to Iowa as an Assistant Professor of Trombone at Iowa State University. Prior to this, he had taught in higher education at the University of Virginia and Morehead State University in Kentucky. In 2008, he published his book “A Guide to Daily Maintenance for Trombone,” which is a unique resource that integrates Audacity Technology, daily exercises, and information collected from renowned performers and pedagogues. This past year, he also released his debut solo CD entitled Conversations.

As a community member, Nathan is passionate about creating outreach events and projects to help music reach individuals of all ages. While in Morehead, Kentucky, he developed the program Meet the Instruments designed to expose second through fifth grade students with band and orchestra instruments. He also provided many solo performances with high school bands to raise funds for students’ private music lessons. He hopes to continue similar outreach opportunities in his new community. 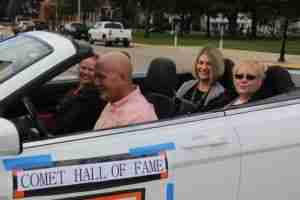 Al Hastings graduated from Manly High School in 1965 and obtained his Bachelor’s Degree in Secondary Mathematics with minors in Physics and Physical Education in 1970 from Dakota Wesleyan University. He later went on to complete a Master of Science in computers at Northwest Missouri State University and subsequently completed an additional 40 graduate hours in computer classes at several universities.

Since a young age, Al was a man of God, which impacted his life tremendously. He made sure he set a strong example with unwavering principles. He used his faith as a foundation to teach students to stand up for what they believed in and persevere when challenges arose. His faith fueled his passion for teaching and coaching young people. His career began in Mount Vernon, South Dakota as a secondary math teacher. After moving to Iowa, he taught and coached football in North Springs-Rock Falls and Turkey Valley prior to becoming a Comet in 1980. During his 25-year tenure, he served in a variety of roles including a math and computer teacher, football assistant coach, track assistant coach, and technology coordinator. After he retired from the public-school system, he taught computers at Immaculate Conception School and served as a volunteer teacher at Gospel Lighthouse Academy in Floyd for eleven years.

Al had many rewarding experiences in connection to Charles City Community School District. He enjoyed working with many great mentors, including high school football coaches, teachers, students, and community members, whom he valued and learned from every day. Most notably, Al enjoyed serving as the District’s Technology Coordinator and establishing the District’s technology infrastructure. His leadership and passion for technology allowed him to create a system in which technology would be accessible by all students, faculty, and staff.

In addition to teaching and coaching, Al served on the Charles City Broadband Committee, was the Wide Area Network Administrator for the Charles City School District and the City of Charles City, and was a board member of Iowa Teachers Education Council. Al and his wife Sherril also owned the Hart Motel in Charles City from 1977-1987.

Al married his high school sweetheart, Sherril, and they shared 51 years of marriage before his passing in 2017. Together, they have two daughters Mary Jensen and Melissa (Robert) Romero and four grandchildren.

Floyd County Public Health Administrator: ‘Assume that it is here.’

Floyd County Public Health Administrator: ‘Assume that it is here.’