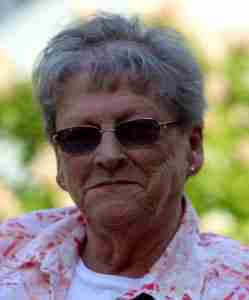 A funeral service for Marie Herold will be held at 11:00 a.m. Wednesday, February 20, 2019, at Immaculate Conception Catholic Church in Charles City with Reverend Gary Mayer officiating.  Burial will be at Calvary Cemetery in Charles City.

Visitation will be at Hauser Funeral Home from 5:00 to 7:00 p.m. Tuesday, February 19, 2019, with a Rosary being prayed at 4:45 p.m.  Visitation will continue one hour before the service at the church on Wednesday.

Marie Frances (Dougherty) Herold was born in rural Waukon, Iowa the daughter of Johnnie and Anna (Haas) Dougherty on July 3, 1939.  She was the eleventh of twelve children.  Marie was educated at country schools through 8th grade then attended Waukon High School.  She was united in marriage to Edmund Peter Herold on June 30, 1958, at St. Mary’s Catholic Church in Lycurgus, Iowa near Waukon.  This union was blessed with five children.

Marie enjoyed putting jigsaw puzzles together, was an avid reader and listened to Elvis and Daniel O’Donnell (she was very proud of her Irish heritage).  She was prompt on sending birthday cards to family and would do anything for anyone.  Marie collected Snow Babies, Depression Glass Dishes and baby dolls.  She spent many hours playing cards with friends and family and liked to two-step to a waltz with her husband and sons.

Marie had a deep love for her family and was proud of all her children, grandchildren and great-grandchildren and loved spending time with them especially during holidays.  She couldn’t wait to meet all of the new members of her family when they were born.  Marie was a wonderful cook and baker who enjoyed canning soups, vegetables and beef (still using her dad’s recipe for beef).  She made the best brownies ever and they didn’t last long at family gatherings.  Marie enjoyed growing flowers and watching birds in her time spent outside. She will be missed by all who loved her and she will be remembered for her dimples, Irish twinkle in her blue eyes and heart of an angel.

Hauser Funeral Home, (641) 228-2323, in Charles City, is in charge of local arrangements.  Online condolences may be left for the family atwww.hauserfh.com.