The following is an official media release from Chickasaw County Emergency Management and E911 Coordinator Jeff Bernatz on the train derailment that originally occurred shortly after 4 p.m. Saturday about three miles southwest of New Hampton:

“At this time we are maintaining operations to mitigate the incident. Families are being allowed back in that were initially evacuated due to the leak of anhydrous ammonia and diesel fuel. Our current weather modeling including wind speed and direction continues to show no danger to the City of New Hampton and its residents. This is ever changing and we will advise the public if conditions change. The Iowa DNR is on scene monitoring water quality downstream. The conductor and engineer from the incident were both taken to Mercy One New Hampton as a precaution and were treated and released. No other injuries have been reported at this time. We are continuing to ask people to avoid the area due to the presence of heavy traffic and work equipment. 220th Street will remain closed between Jasper Ave. and Ivanhoe Ave.” 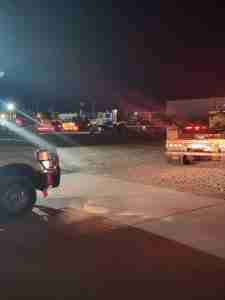 NWS: Cedar River in Charles City Appears to Have Crested