Kids and kids at heart are invited to wear their costumes and be part of the Halloween Parade Saturday in downtown New Hampton.

Parks and Rec Coordinator Tara Hackman says those wishing to be judged in the costume contest be at the Community Center by 10 a.m. Otherwise, participants should be there by 10:30 a.m. for the walking parade.

Hackman says they’re happy to have the parade return after a one-year hiatus.

Businesses along the parade route, as well as the New Hampton Police Department, will hand out treats to the parade participants.

Halloween night trick-or-treating in New Hampton is from dusk til 8 p.m. Sunday night.

Trick-or-treating is a little earlier than usual Sunday night in Charles City.

Mayor Dean Andrews also advised those handing out candy to keep COVID safety in mind and hand out candy individually rather than letting trick-or-treaters reach their own hand into the bowl. 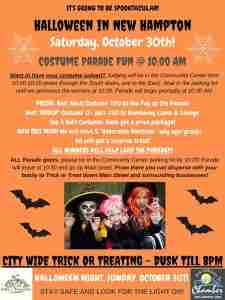