Watkins and Wolfe are the Charles City Woman and Man of the Year respectively for 2021.

During the Annual Community Volunteer Recognition Friday morning  co-hosted by the Charles City Area Chamber of Commerce and Main Street Charles City, the Woman and Man of the Year recipients were revealed.

Judy Hauser with the Senior Center announced Kim Watkins as Charles City’s “Woman of the Year.”

Taylor also saluted Wolfe’s attendance at countless school activities to show his support for the students, coaches and staff. Taylor added that Wolfe, PA announcer for girls high school softball, has a huge heart and really cares about people. 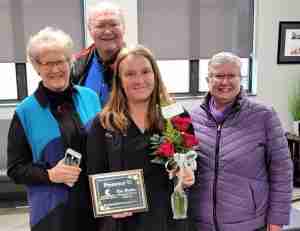 Top volunteers throughout the city were also recognized during the ceremony which was conducted again virtually through the chamber’s Facebook page.  The program was recorded and will be available on the Charles City Public Access Network website, www.charlescitypan.com

CHARLES CITY — Some of the top volunteers from this past year and beyond were recognized on Friday by their non-profit organizations, including the Charles City Man of the Year and Woman of the Year for 2020-21.

The Community Volunteer Recognition Event is hosted each year by Main Street Charles City and the Charles City Area Chamber of Commerce, and open to all non-profits in town to participate in. Like last year, due to COVID, the event was done virtually with just the presenters on hand and not in front of a live audience as usual. It was broadcast on Facebook Live on the Chuck Town: Charles City, Iowa Facebook page, as well as recorded for playback on the Public Access Network at www.charlescitypan.com.

All award winners were selected through a public nomination process or by the non-profit organizations themselves.

Kim Watkins was honored as Woman of the Year, while Larry Wolfe was presented the Man of the Year Award. Kip Hartwell was named the Main Street Charles City Volunteer of the Year, Perry Novak Electric received the Chamber Volunteer Business of the Year Award and Mayor Dean Andrews announced Mary Ann Townsend as the recipient of this year’s America’s Hometown Hero Award.

“Caught in the Act” awards were presented to individuals nominated after being seen doing unselfish acts for others or their community in general. They included: Pat Ohlerking, Carol Bauer, Russ Berns, Michael Bauer, Craig Pogemiller and Bill and Val Biwer.

“Volunteers are the lifeblood of our non-profit programs, they make a lot of things happen or possible,” said Community Development Director Mark Wicks. “There is nothing more powerful or passionate than the heart of a volunteer who does things not because they have to, but because they want to help others. They want to make a difference, big or small … and they do.”

Main Street Volunteer of the Year

Main Street Charles City is a volunteer-driven non-profit organization dedicated to helping to make Charles City a better place to live, work and play. The program is celebrating its 25th anniversary as a Main Street Iowa community in 2021 and 27 years in all as a local organization that has helped make a real difference in town.

“None of that would have been possible without all of the wonderful volunteers we have had pitch in over the years. They are the ones who make it all work,” said Elaine Shelton-Bruton, Past Board Chair for Main Street Charles City. “Each year we select an honoree who has stepped up and stood out through their deeds, dedication, commitment and leadership. This year’s Volunteer of the Year is Kip Hartwell.”

“While not a vocal leader, Kip leads by example,” remarked Shelton-Bruton. “He consistently steps up and volunteers to help out with various events and activities. Despite his busy life as a husband, father, avid Minnesota pro sports fan and working for Wells Fargo as a Business Risk and Control Officer, he still makes time to lend a hand whenever the call for volunteers goes out. The last two 2 years he has spearheaded putting up the Christmas Light Tree decorations in Central Park and not only helped organize a Drive-In Movie Night, but even helped sponsor it. This has been in addition to everything else he does for our program.”

Chamber Volunteer Business of the Year

While many companies encourage their employees to volunteer their time, talents and ideas outside of the workplace for the benefit of the community, there are some businesses and/or employees who go over and above in donating or discounting their time and equipment.

“One year, for the Fourth of July Celebration, he dropped what he was doing and created a special plug adaptor for a vendor that allowed him to serve the park that day,” reported presenter Dakotah Jones, the current Chamber Board President. “And on numerous occasions he has saved the day by dropping everything and fixing an electrical or lighting issue on the portable band shell right before a performance.”

In recognizing Mary Ann Townsend with the America’s Hometown Hero honor, Mayor Dean Andrews pointed to her long history of serving Charles City and Floyd County, both professionally and from a civic-minded standpoint. From volunteering as a Girl Scout and 4-H Club leader, to volunteering with the City Improvement Association, to serving on the Charles City Historic Preservation Commission, Cedar Valley Engine Club Board of Directors, NIACC Advisory Board and Charles City Hotel/Motel Tax Tourism Steering Committee, Townsend has a distinguished record of service to her community.

“One of the biggest joys in her heart is sharing her love of history,” said Andrews. “That started as a librarian at Rockford and continued at the museum, where she had many opportunities to teach and inspire children of all ages.”

Townsend initiated the Century of Tractor Power Festival, which drew hundreds of people from across the United States, as well as Pioneer Day, Train Day and Kids Day programming through the museum. She also worked with tractor enthusiasts, genealogists and other researchers. One of her favorite projects was working with middle school students as they researched and raised funds to restore the old chapel at Riverside Cemetery. Her love of tractors earned her special recognition from the Hart-Parr Collectors Association, Iowa Cornbelt Collectors and the Minneapolis Moline Collectors Association.

Woman of the Year

Judy Hauser presented the Woman of the Year Award, calling Kim Watkins “a doer, full of care and kindness … someone who is very inclusive, has good leadership and organizational skills, is reliable and an exceptionally giving spirit. She has a heart for those that are hurting in our community and the willingness to try and do something about it.””

Hauser marveled at how the office manager at Central Park Dentistry, a wife and mother of two grown children, now a grandmother, and someone her parents described as “the greatest daughter in the world” is also so involved with so many different community activities.

“She created the CC Cares group after seeing the needs of many in the community and found the resources and volunteers to help. They have done all kinds of things to assist people this past year,” said Hauser. “Kim has helped organize the free community Thanksgiving meal at Messiah Church for a number of years now, as well as a community Christmas dinner and assisted with the Bike Rodeo and National Night Out events. She has taken Boy Scouts backpacking in Wyoming, she rings the bell for the Salvation Army at Christmas and is in charge of the Deacons at St. John Lutheran Church. She volunteers as a youth soccer referee, has helped several times with RAGBRAI when it came to town, assisted with a fruit and vegetable giveaway this summer and has helped get Bingo back up and running at the Senior Center.”

Oh, and in her spare time she also raises honey bees.

“Many people say that they’re willing to help, but when you call and ask they’re too busy. Kim is the kind of person that, no matter how busy she is, always finds a way to lend a hand,” stated St. John Church Pastor Russ Leeper in Watkins’ nomination. “Kim wants to see her community7 do well and backs it up wit action. Kim is a person on integrity and a genuine asset to our community.”

“She has truly made a difference in many lives in this community,” said Hauser.

Man of the Year

In presenting the Man of the Year Award, Middle School Principal Joe Taylor described Larry Wolfe as “an example of selfless service to others and a man with a huge heart that really cares about people.”

Throughout his career as a teacher, coach and school administrator, Wolfe has had a chance to share that big heart of his on a daily basis.

“Larry is the person who when he sees others in need comes to their aid,” said Taylor. “Whether that is by providing a hot meal, a timely gift or simply spending time to get to know that person’s situation.”

Currently serving as the Charles City Community School District’s Innovative Campus Principal, Wolfe was hailed as a great example to school administrators, teachers and students alike. He is there in support and to volunteer at almost every after-school event or game, and over the summer months donates his time to assist the Comet softball team as an assistant coach and public address announcer. Taylor noted that during COVID Wolfe took it upon himself to spearhead the organization and distribution of food to students in need. He would show up early each day, make sure everything was organized and ready, then greet every single student who showed up.

“Larry does whatever he can to make a program better. He does all of this without ever asking for as much as a thank you,” Taylor concluded. “Larry has given a great deal back to the Charles City community and its youth.”

To learn more about volunteer opportunities in the community, contact the Main Street Charles City office at (641) 228-2335, the Chamber at (641) 228-4234, email [email protected], or visit with your church, service clubs or any other non-profit organization in town.