What started with a leg cramp on the New Hampton High School football field in early September has turned into part of a Christmas Day national TV program.

During the game between New Hampton and Charles City on September 3rd, the Comets Mario Hoefer came to the aid of the Chickasaws’ Carter Steinlage, whose leg cramped up on a warm, humid night. A picture of Hoefer helping Steinlage stretch went viral, leading to joint national TV appearances for both players.

That display of good sportsmanship also got the attention of The Musial Awards, which celebrates good sportsmanship, and included the Hoefer-Steinlage exchange to be honored during a special ceremony November 20th in St. Louis.

Steinlage says it was the culmination of a crazy journey, which included being treated like top-notch celebrities.

Just like celebrities, Hoefer says they had to prepare for the awards show before the cameras began to roll.

The awards were handed out live November 20th, but recorded for broadcast this Saturday, Christmas Day, at 4 p.m. on CBS TV. 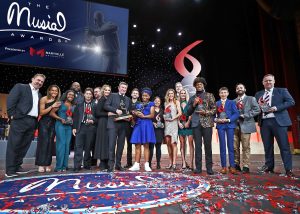