Recruitment efforts to add another officer to the New Hampton Police Department continues and continues to be a challenge.

NHPD has been taking applications since early June after an officer departed the force. The initial recruitment period ended with just one applicant who could not make the testing schedule. After reopening applications, Chief Zach Nosbisch says a candidate was offered a position in August, but declined it due to pay, although it’s not the sole factor in their recruitment battle.

City officials have learned that New Hampton police officers have been making, on average, $2 to $3 less per hour than those in neighboring communities. And while the City has been working through the process to increase pay for the entire police department, Nosbisch says they’re still behind the curve

Nosbisch says he knows the City has the department’s back in their recruitment efforts and they’ll continue to take applications until the job is filled. 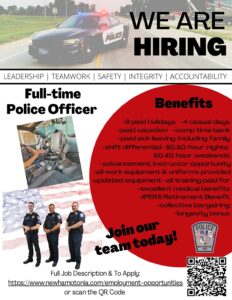